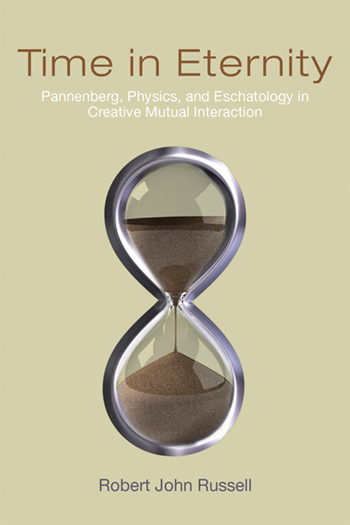 According to Robert John Russell, one of the foremost scholars on relating Christian theology and science, the topic of “time and eternity” is central to the relation between God and the world in two ways. First, it involves the notion of the divine eternity as the supratemporal source of creaturely time. Second, it involves the eternity of the eschatological New Creation beginning with the bodily Resurrection of Jesus in relation to creaturely time. The key to Russell’s engagement with these issues, and the purpose of this book, is to explore Wolfhart Pannenberg’s treatment of time and eternity in relation to mathematics, physics, and cosmology.

Time in Eternity is the first book-length exposition of Russell’s unique method for relating Christian theology and the natural sciences, which he calls “creative mutual interaction” (CMI). This method first calls for a reformulation of theology in light of science and then for the delineation of possible topics for research in science drawing on this reformulated theology. Accordingly, Russell first reformulates Pannenberg’s discussion of the divine attributes—eternity and omnipresence—in light of the way time and space are treated in mathematics, physics, and cosmology. This leads him to construct a correlation of eternity and omnipresence in light of the spacetime framework of Einstein’s special relativity. In the process he proposes a new flowing time interpretation of relativity to counter the usual block universe interpretation supported by most physicists and philosophers of science. Russell also replaces Pannenberg’s use of Hegel’s concept of infinity in relation to the divine attributes with the concept of infinity drawn from the mathematics of Georg Cantor.

Russell then addresses the enormous challenge raised by Big Bang cosmology to Christian eschatology. In response, he draws on Pannenberg’s interpretation both of the Resurrection as a proleptic manifestation of the eschatological New Creation within history and the present as the arrival of the future. Russell shows how such a reformulated understanding of theology can shed light on possible directions for fundamental research in physics and cosmology. These lead him to explore preconditions in contemporary physics research for the possibility of duration, copresence, retroactive causality, and prolepsis in nature.

Appendix to the Introduction: Background Material

Part 1: SRP -> TRP: Revising Pannenberg’s Trinitarian Conception of Eternity and Omnipresence and Its Role in Eschatology in Light of Mathematics, Physics, and Cosmology

Chapter 1: The Trinitarian Conception of Eternity and Omnipresence in the Theology of Wolfhart Pannenberg

Chapter 2: Co-presence and Prolepsis in Light of Mathematics, Physics, and Cosmology

Chapter 3: From Hegel to Cantor: New Insights for Pannenberg’s Discussion of the Divine Attributes

Chapter 4: Covariant Correlation of Eternity and Omnipresence in Light of Special Relativity

Part 2: TRP -> SRP: The Theological Reconstruction of Pannenberg’s Views in Light of Mathematics, Physics, and Cosmology as Offering Suggestions for New Research Programs in the Philosophy of Time and in Physics

Chapter 5: A New Flowing Time Interpretation of Special Relativity Based on Pannenberg’s Eternal Co-presence and the Covariant Theological Correlation of Eternity and Omnipresence

AmazonUniversity of Notre Dame Press
Go Back to CTNS Books