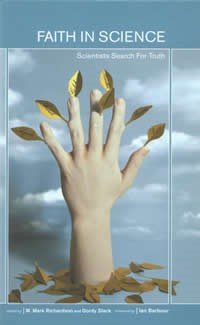 Science vs religion-the two have traditionally been seen as having an adversarial relationship, from before Galileo to this day. Faith in Science demonstrates how misleading this portrayal is, by allowing those who know best—scientists—speak for themselves.

W. Mark Richardson and Gordy Slack, philosopher and science writer respectively, conducted interviews with twelve of the world's top scientists on subjects ranging from the existence and nature of God to the role of religion and spirituality in modern scientific work. What's revealed is a broad diversity of perspectives on the relationship between science and religion. The approaches are as surprising as they are varied, but all defy the stereotypes embedded in so much of the popular science versus religion debates.

The chapters open with brief profiles of the scientist interviewed. Conversations explore such issues as the comparative natures of scientific and religious truth; changing conceptions of God in a world whose materiality is increasingly emphasized; the implications for religion of new discoveries in physics and astronomy; and the limits of both science and religion. This complex mosaic of unguarded accounts demonstrates how two of the major cultural forces in modern life, so often portrayed as conflicting, can coexist.

The volume includes interviews with the following scientists:

Available from Routledge and Amazon 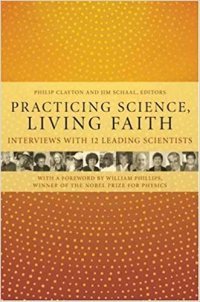 Twelve scientists from diverse backgrounds and disciplines demonstrate that it is indeed possible for profound intellectuals to integrate the life of science with the life of faith. In honest and inspiring interviews, they describe the difficult though rewarding process of reconciling their faith with their science and reveal the ways in which the two spheres can not only coexist but also mutually enhance each other.

Jane Goodall begins the conversation by emphasizing the importance of recognizing the "spark of spirit" that runs through all creatures, human and animal. Robert Pollack discusses his motivations for opening a major center for the study of science and religion at Columbia University. Khalil Chamcham, a Moroccan astrophysicist and devout Muslim, moves from the study of galaxy formation to a new dialogue between Islam and the West. Thomas Odhiambo, a Kenyan entomologist, helps to bring sustainable agriculture to sub-Saharan Africa by uniting African animist and Christian traditions, and Henry Thompson, a computer scientist, utilizes his Quaker practice in both his science and his work as a mediator.

Thoughtful and compelling, these and other scientists recount a rich integration of science and religion in their practice, their experience, and their approach to their work. Some find a deep harmony between the life of faith and the practice of science, whereas others struggle with the ongoing tensions. These original interviews range across the metaphysical, ethical, and religious implications of cutting-edge research. Taken together, they offer a unique picture of how scientists make peace with their work and their spirituality.

Science and the Spiritual Quest: New Essays by Leading Scientists

Addressing fundamental questions about life, death and the universe Science and the Spiritual Quest examines the ways in which scientists negotiate the complex frontiers between their scientific and religious beliefs. Distinguished cosmologists, physicians, biologists and computer scientists of different faiths explore the connections between the domain of science and the realms of ethics, spirituality and the divine. Through essays and frank interviews, they offer honest, stimulating, and often intensely personal thoughts about life's most impenetrable mysteries. This unique volume presents radical new approaches to the religion/science debate and highlights the continued importance of the "spiritual quest" in a world transformed by the developments of science.

1. Science, Spirituality and Religion: An Exploration of Bridges and Gaps, Jocelyn Bell Burnell

2. Must Not the Judge of All the Earth Do Justice? God's Nature and the Existence of Genetic Diseases in Man, Kenneth S. Kendler

5. Does Science Offer Evidence of a Purpose and a Transcendent Reality?, Cyril Domb

10. Darwinism and Atheism: A Marriage Made in Heaven?, Michael Ruse

12. The Horrors of Humanity and the Computation of the Self, Michael A. Arbib

15. The Challenges and Possibilities for Western Monotheism, Arthur Peacocke

16. One Quest, One Knowledge, George Sudarshan

Available from Routledge and Amazon